As we journey along in life, there are often times when we will be directed into what I like to call “ the Philip and Ethiopian Encounter”. We are called to fulfill this journey through the Great Commission. We are to Encounter People ~ a great value. The question is, will we recognize and be willing to participate in this Encounter? Our series on “INVITE”, should awaken the dormant giant within our hearts to a broken world, devoid of the power of God, to invite people into a living relationship with Jesus. 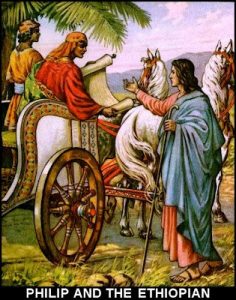 Acts 8:30 So Philip ran to him and heard him reading Isaiah the prophet and asked, “Do you understand what you are reading?”Acts 8:31 And he said, “How can I, unless someone guides me?” And he invited Philip to come up and sit with him.

In the NIV it says “ How can I unless someone explains it to me”.

We are meant to invite, however here you have the Ethiopian, with such a hunger for God, that he invites Philip to come up alongside him and guide / explain the word of God to him.

In our Oikos, (originally meant, our household, or family, and later it was extended to our people group of influence), our social, our economical and our environmental worlds, they are filled with people, crying out “ How can I unless someone guides me ?”.

Often we are not even aware of this cry, because so much of the time it is not openly brokered, but it is a primal scream from the depths of souls that were created to worship God. Hence, when we get down to the subject, how often have we heard the voice of many seekers say; “ I’m not religious but I am spiritual”. That line on so many different levels, may be dissected into various meanderings of the truth of this perception, depending from whom one is gaining a perspective. However, what most mean, is that there is some perceived ethereal connection with a spirit world. In all of these, there is still only one way to God, and that is through His son Jesus. The point is that people are looking to be guided.

We are given to be Ambassadors of Reconciliation; called to reconcile the world to the Father, the only true ministry given to us by Jesus (2 Cor 5:18)

We see from Acts 8:31, Phillip already knew what the Ethiopian eunuch didn’t know, not in an arrogant or superior manner but a humble servant willing to guide this Ethiopian. He, Phillip was willing to offer himself as the response from Jesus that the eunuch needed. He offered the Ethiopian an invitation. A small invitation ….. that took the gospel to Africa. WOW….

Offering an invitation to others is a supernatural process. In reality, it is God who brings people to Christ through the power of the Holy Spirit. It has never been our cleverness, our methods, our programs, or our persuasiveness. If we could grasp the innocence of an invitation fired by the power of the Holy Spirit, we would more clearly understand that, in the spiritual realm, our most effective invitational opportunities, regardless of method, are simply obedient responses to the Father’s invitation; partnering with Him in a ministry which He has already initiated.

In John 4 the simple one liner, where Jesus meets the Samaritan woman at the well, could have been viewed by the woman as a pick up line, “ Give me a drink”, yet this invitation, was to lead to a greater invitation, it had the power, and the magnitude, not only for a cup of water but a tsunami of revelation and eternal life~changing power. Not only for this woman but for a whole Samaritan village. We look at this invitation and we realize once again Jesus already knew what this woman was unable to know, hence her response, “ but sir you don’t have a bucket to draw water”. Often the “Ethiopians”, that God places in our lives, can only see what’s on the surface. They have no true spiritual depth of which they often speak, and when the litmus test comes, their cry in humility and honesty opening their hearts say;“ How can I unless someone guides me ?”.

As we go armed by the assurance of “Jesus with us”, obedience to the Father, in the power of Holy Spirit and our simple invitation, the nett result of which we truly have no idea. 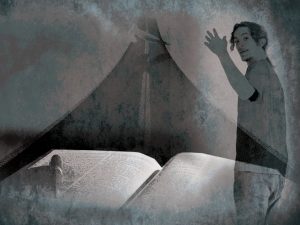 Go Ahead; Ambassador of Reconciliation ……..INVITE.